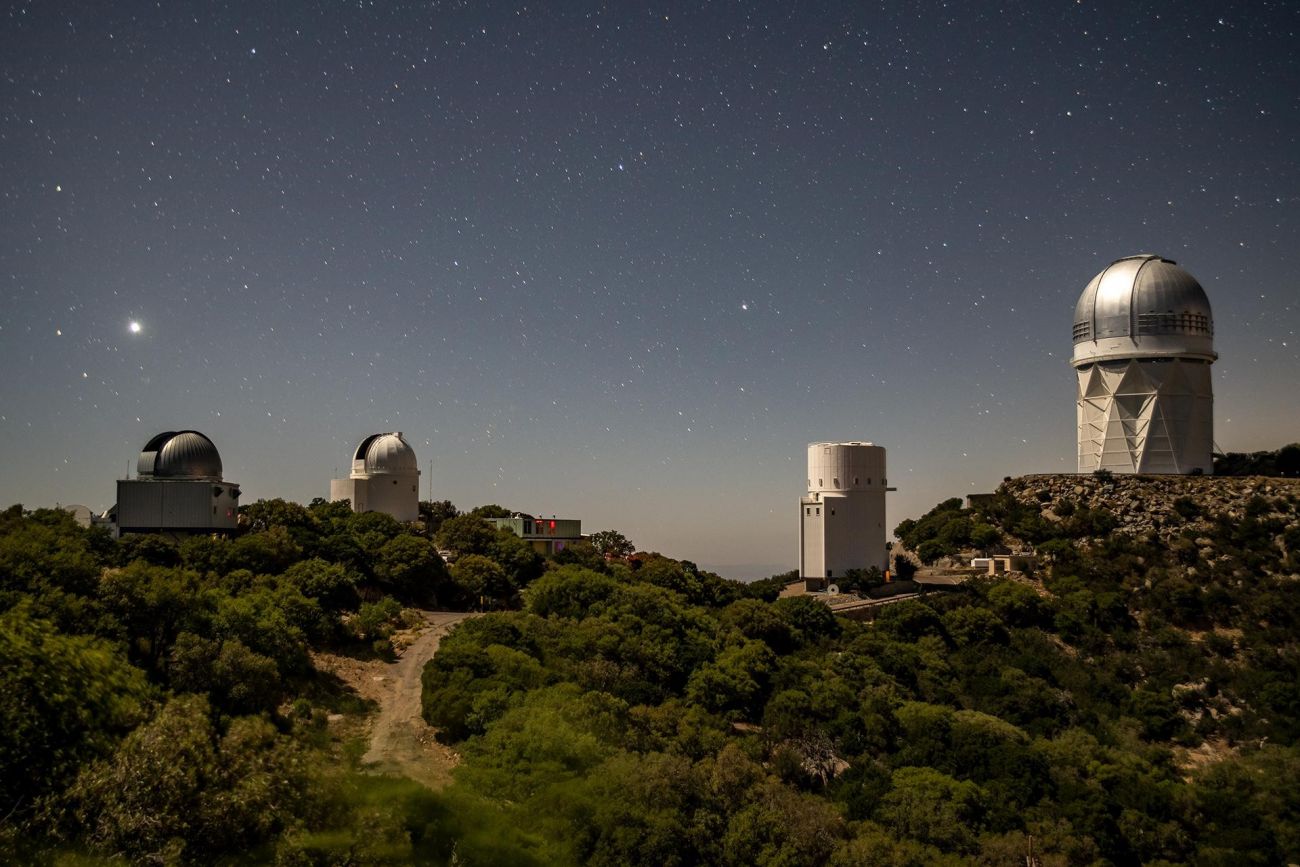 The Dark Energy Spectroscopic Instrument (DESI) has capped off the first seven months of its survey run by smashing through all previous records for three-dimensional galaxy surveys, creating the largest and most detailed map of the universe ever. Yet it’s only about 10% of the way through its five-year mission. Once completed, that phenomenally detailed 3D map will yield a better understanding of dark energy, and thereby give physicists and astronomers a better understanding of the past – and future – of the universe. Meanwhile, the impressive technical performance and literally cosmic achievements of the survey thus far are helping scientists reveal the secrets of the most powerful sources of light in the universe.

DESI scientists are presenting the performance of the instrument, and some early astrophysics results, this week at a Berkeley Lab-hosted webinar called CosmoPalooza, which will also feature updates from other leading cosmology experiments.

"DESI began to measure the distances to galaxies in May 2021 and in these months it has managed to outnumber all previous maps. With the system of the 5000 robotic fiber telescope we are increasing the cosmological precision to limits never seen before" comments the Researcher at the Universidad Autónoma de Madrid, Violeta González Pérez.

"It's very exciting", comments Marc Manera, researcher at the Institut de Física d'Altes Energies (IFAE) in Barcelona, “we can make a very detailed map of the distribution of galaxies in three dimensions, and we see their structure in filaments, clusters and empty areas. DESI has come a long way to get to this point. Just to obtain and validate the images from where the galaxies are selected we took more than five years ”.

The DESI project was proposed more than a decade ago and construction of the instrument began in 2015. It was installed on the Nicholas U. Mayall 4-meter telescope at the Kitt Peak National Observatory near Tucson, Arizona, United States and the instrument saw first light at the end of 2019. The coronavirus pandemic kept the telescope closed for several months, until in December 2020 DESI looked up at the sky again to test its hardware and software. In May 2021 DESI was ready to begin its observations.

But the work on DESI was not finished when the observations began. It is a complex instrument that requires continuous work to perform properly. The team in charge of the instrument makes sure that it works well and automatically, ideally without any intervention during night observations. Such observations can even be boring, scientists say. But this monotonous productivity requires incredibly detailed control over the 5000 new generation robots that place the optical fibers of the DESI instrument, ensuring that their positions are correct with less than 10 microns of error; “The precision of the aiming is impressive”, explains Otger Ballester, an engineer at the Institut de Física d'Altes Energies (IFAE), in Barcelona, ​​who has worked on the construction of DESI's self-guided and focused units, “It is less than the thickness of a sheet of paper. Our autoguiding systems have to help position the instrument in such a way that it can collect light from galaxies that are more than a billion light years away from us. Building these systems has been difficult, but the success of the instrument shows that it has been worth the effort and makes our team very proud. ”

"It is very gratifying to see that the work you have dedicated to making the instrument point properly serves to reveal the secrets of the universe" comments Santiago Serrano from the Institute of Space Sciences (ICE-CSIC) and the Institut d'Estudis Espacials de Catalunya (IEEC), in Barcelona, which has designed the instrument's self-guiding software.

A small patch of DESI’s 5000 fiber-optic "eyes" at work. The robotic fiber positioners can be seen moving around their patrol area. The fibers themselves are back-illuminated with blue light so that their positions can be measured with the Fiber View Camera.

That level of accuracy is needed to accomplish the primary task of the survey: collecting detailed color spectrum images of millions of galaxies across more than a third of the entire sky. By breaking down the light from each galaxy into its spectrum of colors, DESI can determine how much the light has been redshifted – stretched out toward the red end of the spectrum by the expansion of the universe during the billions of years it traveled before reaching Earth. It is those redshifts that let DESI see the depth of the sky.

The more redshifted a galaxy’s spectrum is, in general, the farther away it is. With a 3D map of the cosmos in hand, physicists can chart clusters and superclusters of galaxies. Those structures carry echoes of their initial formation, when they were just ripples in the infant cosmos. By teasing out those echoes, physicists can use DESI’s data to determine the expansion history of the universe.

"It is incredible how by studying the distance between the most distant galaxies we can learn from the physics of the microscopic Universe at its birth", comments Santiago Ávila, a researcher at theInstituto de Física Teórica de Madrid. "Hidden in these maps are key clues to understanding physics during the first fraction of a second of life in the universe."

"One of the fundamental scientific objectives of DESI is to measure the history of the expansion of the universe," says Eusebio Sánchez, from CIEMAT, in Madrid. “The capacity of the project is amazing, which already at such an early stage allows obtaining scientific results to understand the universe. ”.

But understanding the fate of the universe will have to wait until DESI has completed more of its survey. In the meantime, DESI is already driving breakthroughs in our understanding of the distant past, more than 10 billion years ago when galaxies were still young.

The DESI science team is also using their data to understand the behavior of intermediate-mass black holes in small galaxies. Enormous black holes are thought to inhabit the cores of nearly every large galaxy, like our own Milky Way. But whether small galaxies always contain their own (smaller) black holes at their cores is still not known. Black holes on their own can be nearly impossible to find – but if they attract enough material, they become easier to spot.

When gas, dust, and other material falling into the black hole heats up (to temperatures hotter than the core of a star) on its way in, an active galactic nucleus (AGN) is formed. In large galaxies, AGNs are among the brightest objects in the known universe. But in smaller galaxies, AGNs can be much fainter, and harder to distinguish from newborn stars. “The spectra taken by DESI can help solve this problem – and its wide reach across the sky will yield more information about the cores of small galaxies than ever before.” comments Mar Mezcua from the Institute of Space Sciences (ICE-CSIC) and the Institut d'Estudis Espacials de Catalunya (IEEC), in Barcelona. Those cores, in turn, will give scientists clues about how bright AGNs formed in the very early universe.

"DESI is an innovative galaxy survey. It will be essential to understand the processes that regulate the formation and evolution of galaxies", comments Malgorzata Siudek, Marie Curie researcher at the Institut de Física d’Altes Energies (IFAE) in Barcelona.

Quasars, another particularly bright variety of galaxies, are among the brightest and most distant objects known, and are excellent probes of the early universe because of the enormous amount of energy they emit; the quasars that DESI observes emitted their light eleven billion years ago. DESI scientists are using the data to understand the evolution of these objects. It is thought that quasars start out surrounded by an envelope of dust, which reddens the light they give off, like the sun through haze. As they age, they drive off this dust and become bluer. But it has been hard to test this theory, because of the paucity of data on red quasars. DESI is changing that, finding more quasars than any prior survey, with an estimated 2.4 million quasars expected in the final survey data.

There are many more scientific results that DESI is already producing. It has cataloged more than 7.5 million galaxies and continues to observe at the rate of more than a million a month. In November 2021 alone, DESI measured the redshift of 2.5 million galaxies. At the end of the project, in 2026, DESI is expected to have more than 35 million galaxies in its catalog, which will allow a huge variety of investigations on cosmology and astrophysics. 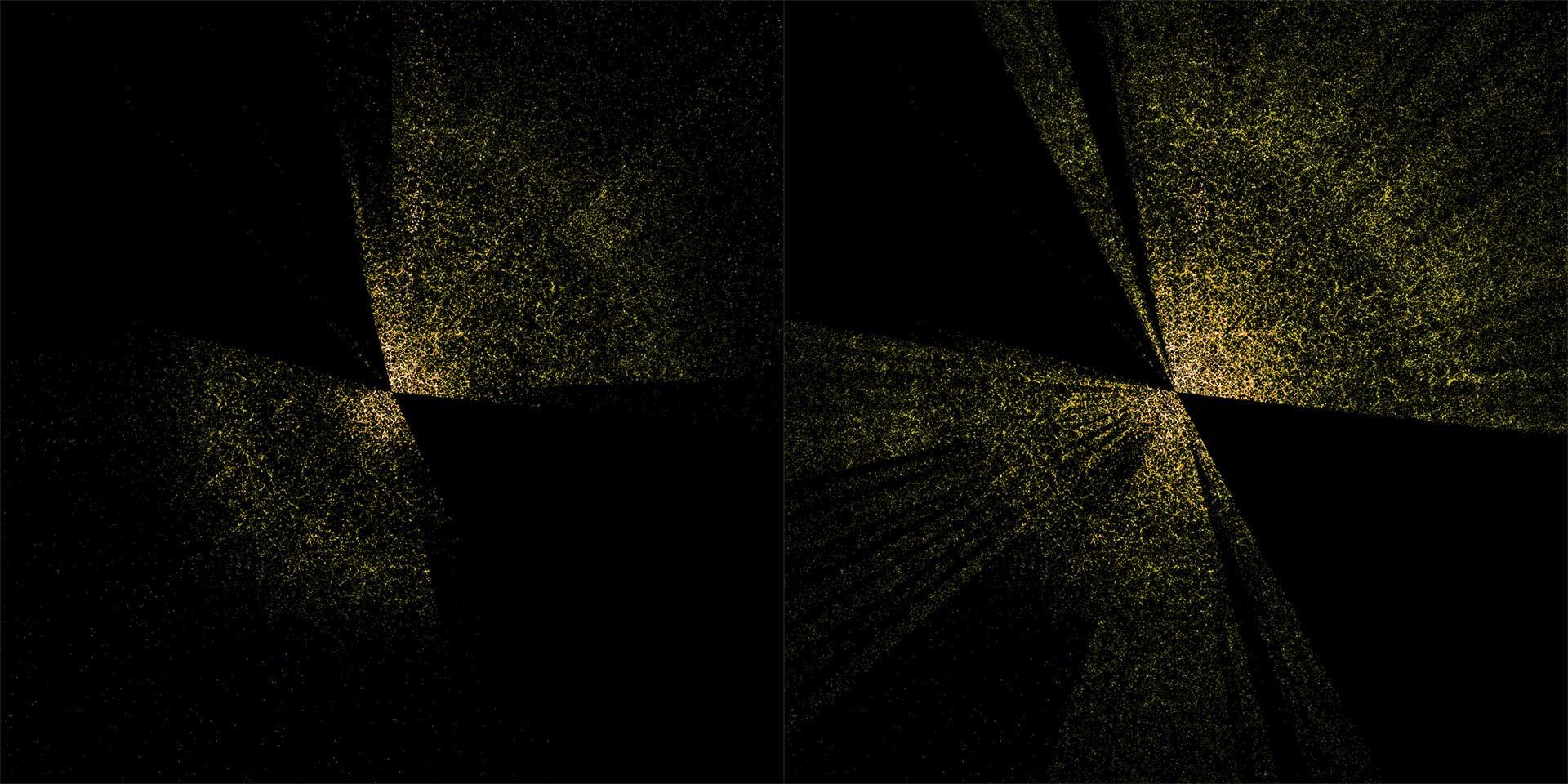 A slice through the 3-D map of galaxies from the completed Sloan Digital Sky Survey (left) and from the first few months of the Dark Energy Spectroscopic Instrument (DESI; right). The earth is at the center, with the furthest galaxies plotted at distances of 10 billion light years.  Each point represents one galaxy. This preliminary version of the DESI map shows only 400,000 of the 35 million galaxies that will be in the final map.

The DESI collaboration is honored to be permitted to conduct scientific research on Iolkam Du’ag (Kitt Peak), a mountain with particular significance to the Tohono O’odham Nation.