Deep insights into the Arctic of tomorrow 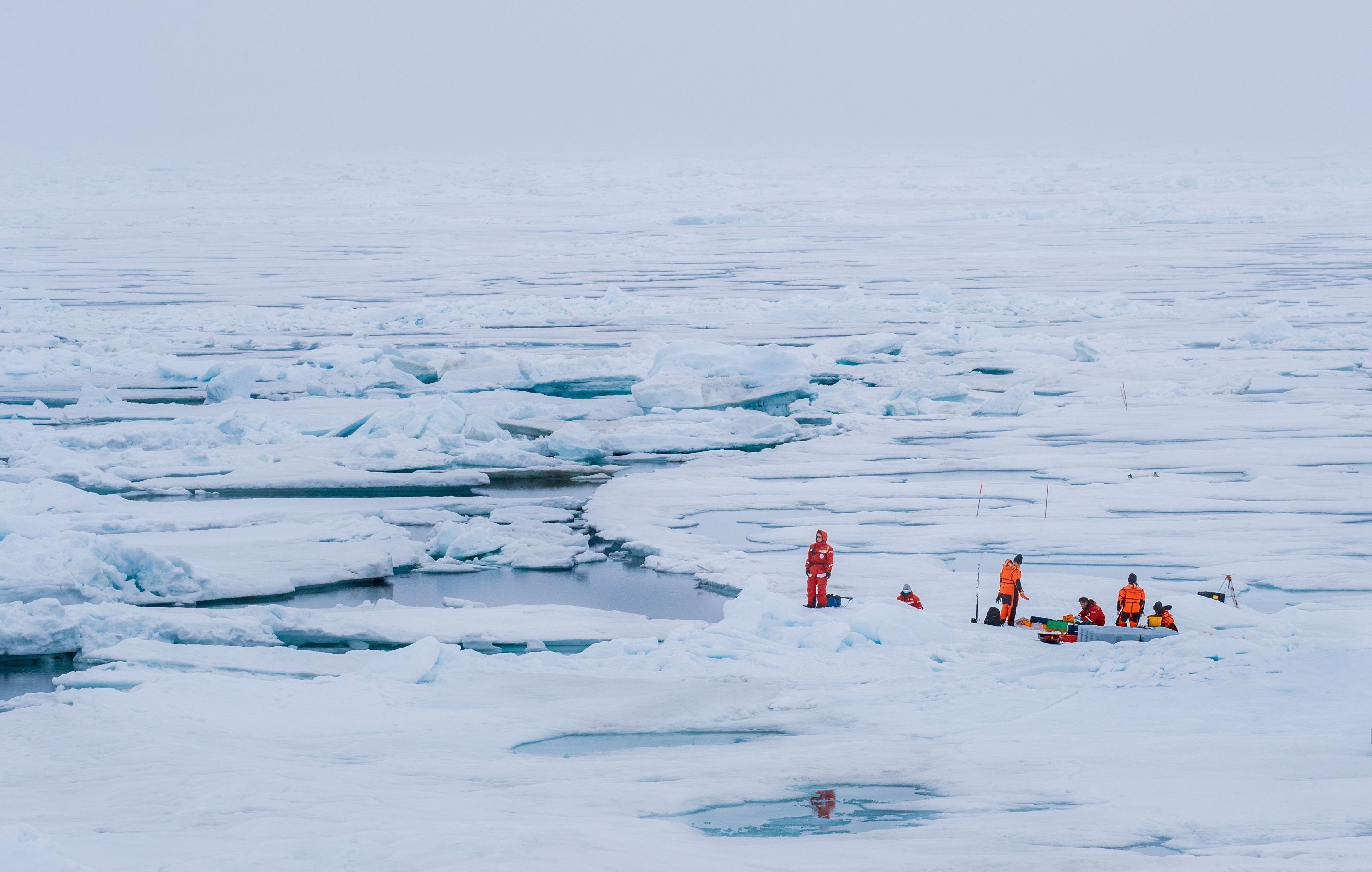 24-hour research marathon. The team aim to record a "snapshot" of the daily cycles in the arctic summer. They focus on the ice surface, the interface between ice/ocean and the water column down to 350 m depth.

Hundreds of international researchers are currently analyzing observations from the one-year Multidisciplinary drifting Observatory for the Study of Arctic Climate  (MOSAiC) expedition, during which hundreds of environmental parameters were recorded with unprecedented accuracy and frequency over a full annual cycle in the Central Arctic Ocean. They have now published three overview articles on the MOSAiC atmosphere, snow and sea ice, and ocean programs in the journal Elementa, highlighting the importance of examining all components of the climate system together. These results present the first complete picture of the climate processes in the central Arctic which is warming more than two times as fast as the rest of the planet - processes which affect weather and climate worldwide.

Diminishing sea ice is a symbol of ongoing global warming: in the Arctic, its extent has almost halved in summer since satellite records began in the 1980s. Less well studied but equally relevant are the thickness and other properties of the ice. The question of what this means for the future Arctic and how these changes will affect the global climate were the impetus for the historic MOSAiC expedition with the German research icebreaker Polarstern from September 2019 to October 2020.

With these results coming out now the researchers are building the most complete observation-based picture of climate processes in the Arctic, where the surface air temperature has been rising more than two times as fast as on the rest of the planet since the 1970s. To study the relevant processes for a full year required a special concept, in part because the Central Arctic Ocean is still ice-covered in winter and therefore difficult to access.

During the expedition, the icebreaker froze to a large ice floe and drifted with the natural transpolar drift across the Arctic Ocean. And this is where the first surprises came. "We found more dynamic and faster drifting pack ice than expected. This not only challenged the teams on the ground in their daily work, but above all resulted in changed sea-ice properties and sea-ice thickness distributions," reports Dr Marcel Nicolaus, sea-ice physicist at the Alfred Wegener Institute, Helmholtz Centre for Polar and Marine Research (AWI) and co-leader of Team Ice in the MOSAiC project.

Spanish National Research Council (CSIC) has been involved in the MOSAiC campaign as a Spanish partner with funding from the State Research Agency (AEI). Three CSIC research groups participated, and two of them are presenting their results today.

The groups conducted respectively by Carolina Gabarró from the Institut de Ciències del Mar (ICM-CSIC), and Estel Cardellach, from the Institute of Space Sciences (ICE - CSIC) and member of the Institut d‘Estudis Espacials de Catalunya (IEEC) participated in the articles published today in the journal Elementa.

The BEC group working on remote sensing of the oceans, from the ICM-CSIC, has been responsible for placing a radiometer on the Arctic surface that works at a frequency of 1.4GHz, an instrument similar to the one carried by the SMOS satellite from the European Space Agency, which can measure the thickness of sea ice. "The objective of this experiment was to obtain radiometric measurements under different conditions in order to better understand how certain parameters (snow thickness, ice temperature and salinity) affect the emissivity of ice, and to be able to improve the measurements of ice thickness obtained by the SMOS satellite", explains the ICM-CSIC researcher, Carolina Gabarró. “This is a fundamental variable to monitor the drastic changes that are taking place in the Arctic. We are very happy with the results we have obtained with this radiometer, designed and developed in Spain”, she adds.

The Arctic is one of the most remote regions on the planet and one of the most hard-to-reach areas. That is why, in order to steadily monitor the state of the ice, satellite information is essential. The radiometer installed by the ICM-CSIC team will allow us to obtain more reliable estimates of the thickness of the ice via satellites.

For its part, the Earth Observation group from ICE-CSIC was responsible for an experiment installed on the ice floe to study the interaction between sea ice and satellite navigation signals (such as GPS). The experiment was funded by the European Space Agency (ESA). "The equipment was designed to be able to operate in the extreme conditions of the Arctic, autonomously and almost continuously," explains researcher Estel Cardellach, (ICE-CSIC and IEEC). “We investigate what kind of sea ice information contains the acquired data. Are these observations sensitive to the thickness of the ice? To its roughness? To the amount of salt or presence of water on the surface?". As Cardellach explains, the preliminary results suggest that this measurement technique using navigation signals could be applied from low-cost satellites to continuously monitor the poles.

The three overview articles serve as references for a vast array of future scientific work. "The physical observations are the basis for interpreting biogeochemical cycles and ecosystem processes, and for supporting coupled models that we use to learn even more about climate feedbacks and the global repercussions of Arctic change. These changes can affect weather and climate worldwide," says Prof. Markus Rex, head of MOSAiC and atmospheric scientist at the AWI. "It is fascinating how accurately we can map individual processes and relate them to each other. I am pleased to see how several hundred MOSAiC participants have collaborated on these publications. International cooperation with expedition participants from so many countries continues productively in a highly coordinated manner, even though the expedition has been over for more than a year. In this way, we will be able to provide ever more important insights into climate change, which will provide a knowledge base for societal transformation towards a sustainable approach to planet Earth," says MOSAiC leader Markus Rex.

During the Multidisciplinary drifting Observatory for the Study of Arctic Climate (MOSAiC) expedition, experts from 20 nations explored the Arctic for an entire year. From autumn 2019 to autumn 2020, the German research icebreaker Polarstern drifted frozen in the ice through the Arctic Ocean. MOSAiC was coordinated by the Alfred Wegener Institute, Helmholtz Centre for Polar and Marine Research (AWI). In order to make this unique project a success and to obtain the most valuable data possible, more than 80 institutes had pooled their resources in a research consortium. The total cost of the expedition was about 150 million euros, mostly funded by the German Federal Ministry of Education and Research.

This research is presented in the following overview articles published in the journal Elementa.