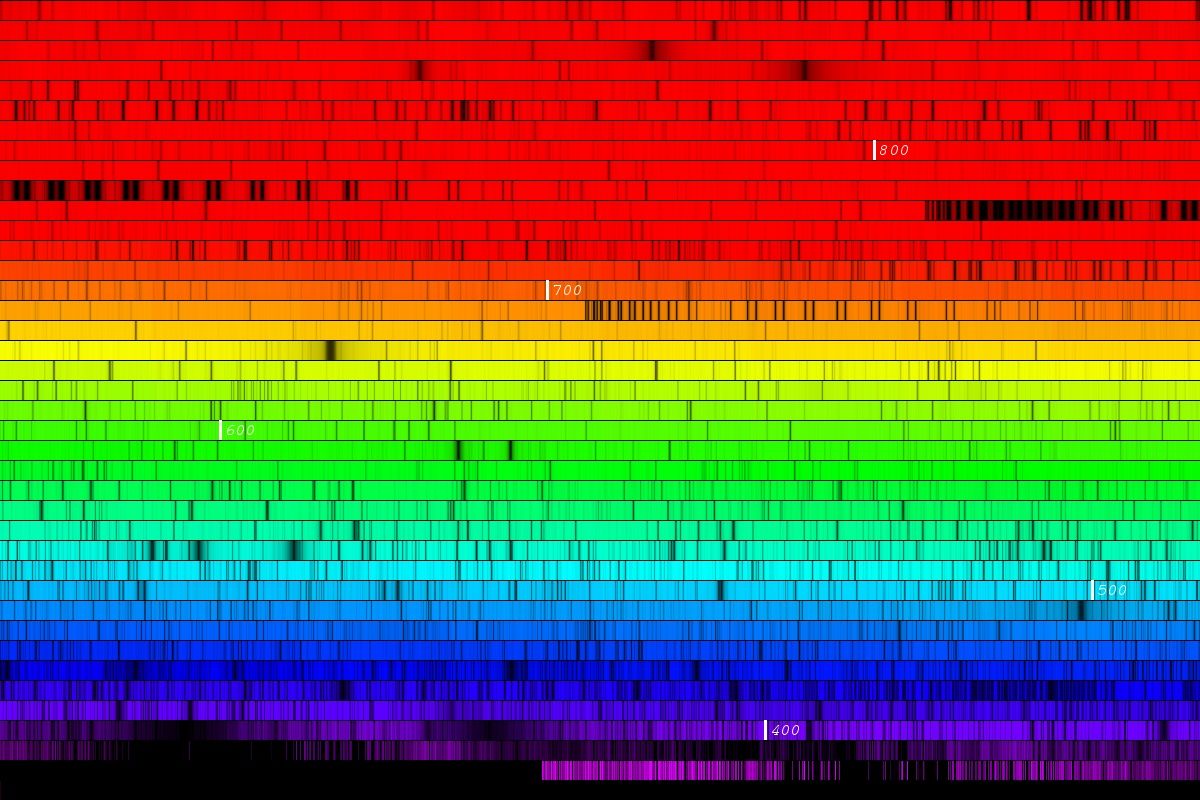 Spectrum of the Sun, taken with the NARVAL very high-resolution spectrograph installed at the Télescope Bernard Lyot, Observatoire Midi-Pyrénées. Spectra such as this, in particular the properties of the dark absorption lines that are clearly visible in this image, allow astronomers to deduce a star's temperature and chemical composition.

An international team of astronomers, in which researcher Aldo Serenelli from the Institute of Space Sciences (ICE-CSIC) and the Institute of Space Studies of Catalonia (IEEC) participates, have resolved the decade-long solar abundance crisis: the conflict between the internal structure of the Sun as derived from the analysis of solar oscillations (helioseismology) and the structure derived from the fundamental theory of stellar evolution, which in turn relies on measurements of the present-day Sun's chemical composition.

The study published at Astronomy & Astrophysics, in which Aldo Serenelli from the Institute of Space Sciences and Institut d'Estudis Espacials de Catalunya (IEEC) participates, resolves the apparent contradiction between the tried-and-true method method so far to determine the chemical composition of the Sun and a more innovative, precise technique to map the internal structure of the Sun.

The tried-and-true method in question is spectral analysis. In order to determine the chemical composition of our Sun, or of any other star out there, astronomers routinely turn to spectra: the rainbow-like decomposition of light into its different wavelengths. Stellar spectra contain conspicuous, sharp dark lines, first noticed by William Wollaston in 1802, famously rediscovered by Joseph von Fraunhofer in 1814, and identified as tell-tale signs indicating the presence of specific chemical elements by Gustav Kirchhoff and Robert Bunsen in the 1860s.

Pioneering work by the Indian astrophysicist Meghnad Saha in 1920 related the strength of those "absorption lines" to stellar temperature and chemical composition, providing the basis for our physical models of stars. Cecilia Payne-Gaposchkin's realization that stars like our Sun consist mainly of hydrogen and helium, with no more than trace amounts of heavier chemical elements, is based on that work.

The underlying calculations relating spectral features to the chemical composition and physics of the stellar plasma have been of crucial importance to astrophysics ever since. They have been the foundation of a century-long progress in our understanding of the chemical evolution of the universe as well as of the physical structure and evolution of stars and exoplanets. That is why it came as something of a shock when, as new observational data became available and provided an insight into the inner workings of our Sun, the different pieces of the puzzle apparently did not fit together.

The modern standard model of solar evolution is calibrated using a famous (in solar physics circles) set of measurements of the solar atmosphere's chemical composition, published in 2009. But in a number of important details, a reconstruction of our favorite star's inner structure based on that standard model contradicts another set of measurements: helioseismic data, that is, measurements that track very precisely the minute oscillations of the Sun as a whole – the way that the Sun rhythmically expands and contracts in characteristic patterns, on time scales between seconds and hours.

Highly accurate helioseismic measurements gave results about the Sun's interior structure that were at odds with the solar standard models. According to helioseismology, the so-called convective region within our Sun where matter rises and sinks down again, was considerably larger than the standard model predicted. The speed of sound waves near the bottom of that region also deviated from the standard model's predictions, as did the overall amount of helium in the Sun. To top it off, certain measurements of solar neutrinos – fleeting elementary particles, hard to detect, reaching us directly from the Sun's core regions – were slightly off compared to experimental data, as well.

Astronomers had what they soon came to call a "solar abundances crisis," and some proposals in search of a way out suggested that the Sun maybe accrete some metal-poor gas during its planet-forming phase or that energy was being transported by the notoriously non-interacting dark matter particles.

The newly published study has managed to resolve that crisis, by revisiting the models on which the spectral estimates of the Sun's chemical composition are based. Early studies of how the spectra of stars are produced had relied on something known as local thermal equilibrium. They had assumed that locally, energy in each region of a star's atmosphere has time to spread out and reach a kind of equilibrium. This would make it possible to assign to each such region a temperature, which leads to a considerable simplification in the calculations.

But as early as the 1950s, astronomers had realized that this picture was oversimplified. Since then, more and more studies incorporated so-called Non-LTE calculations, dropping the assumption of local equilibrium. The Non-LTE calculations include a detailed description of how energy is exchanged within the system – atoms getting excited by photons, or colliding, photons getting emitted, absorbed or scattered. In stellar atmospheres, where densities are far too low to allow the system to reach thermal equilibrium, that kind of attention to detail pays off. There, Non-LTE calculations yield results that are markedly different from their local-equilibrium counterparts.

Applying Non-LTE to the solar photosphere

Maria Bergemann's group at the Max Planck Institute for Astronomy is one of the world leaders when it comes to applying Non-LTE calculations to stellar atmospheres. As part of the work on her PhD in that group, Ekaterina Magg set out to calculate in more detail the interaction of radiation with the key elements in the solar photosphere – the outer layer where most of the Sun's light originates, and also where the absorption lines are imprinted on the solar spectrum.

In this study they tracked all chemical elements that are relevant to the current models of how stars evolved over time, and applied multiple independent methods to describe the interactions between the Sun's atoms and its radiation field in order to make sure their results were consistent. For describing the convective regions of our Sun, they used existing simulations that take into account both the motion of the plasma and the physics of radiation ("STAGGER" and "CO5BOLD”). For the comparison with spectral measurements, they chose the data set with the highest available quality: the solar spectrum published by the Institute for Astro- and Geophysics, Göttingen. “We also extensively focused on the analysis of statistical and systematic effects that could limit the accuracy of our results”, notes Magg.

A Sun with more oxygen and heavier elements

The new calculations showed that the relationship between the abundances of these crucial chemical elements and the strength of the corresponding spectral lines was significantly different from what previous authors had claimed. Consequently, the chemical abundances that follow from the observed solar spectrum are somewhat different than stated in previous analysis.

"We found, that according to our analysis the Sun contains 26% more elements heavier than helium ("metals") than previous studies had deduced", explaines Magg.

"The value for the oxygen abundance was almost 15% higher than in previous studies." The new values are, however, in good agreement with the chemical composition of primitive meteorites ("CI chondrites") that are thought to represent the chemical make-up of the very early solar system.

When those new values are used as the input for current models of solar structure and evolution, the puzzling discrepancy between the results of those models and helioseismic measurements disappears. The in-depth analysis of how spectral lines are produced, with its reliance on considerably more complete models of the underlying physics, manages to resolve the solar abundance crisis. "The new solar models based on our new chemical composition are more realistic than ever before: they produce a model of the Sun that is consistent with all the information we have about the Sun's present-day structure – sound waves, neutrinos, luminosity, and the Sun's radius – without the need for non-standard, exotic physics in the solar interior,” says Bergemann.

"The results of this study once again place the Sun as a fundamental reference in studies of stellar physics. This is of utter importance for different astrophysics areas, and especially for the detailed characterization of the internal structure of other stars, which is the main goal objective of PLATO, the European Space Agency's M3 mission", adds Aldo Serenelli.

As an added bonus, the new models are easy to apply to stars other than the Sun. At a time where current and in process large-scale surveys like SDSS-V and 4MOST are providing high-quality spectra for an ever greater number of stars, this kind of progress is valuable indeed – putting future analyses of stellar chemistry, with their broader implications for reconstructions of the chemical evolution of our cosmos, on a firmer footing than ever before.

The results described here have been published as E. Magg et al., "Observational constraints on the origin of the elements. IV: The standard composition of the Sun" in the journal Astronomy & Astrophysics.