The best studied terrestrial planet outside the Solar System 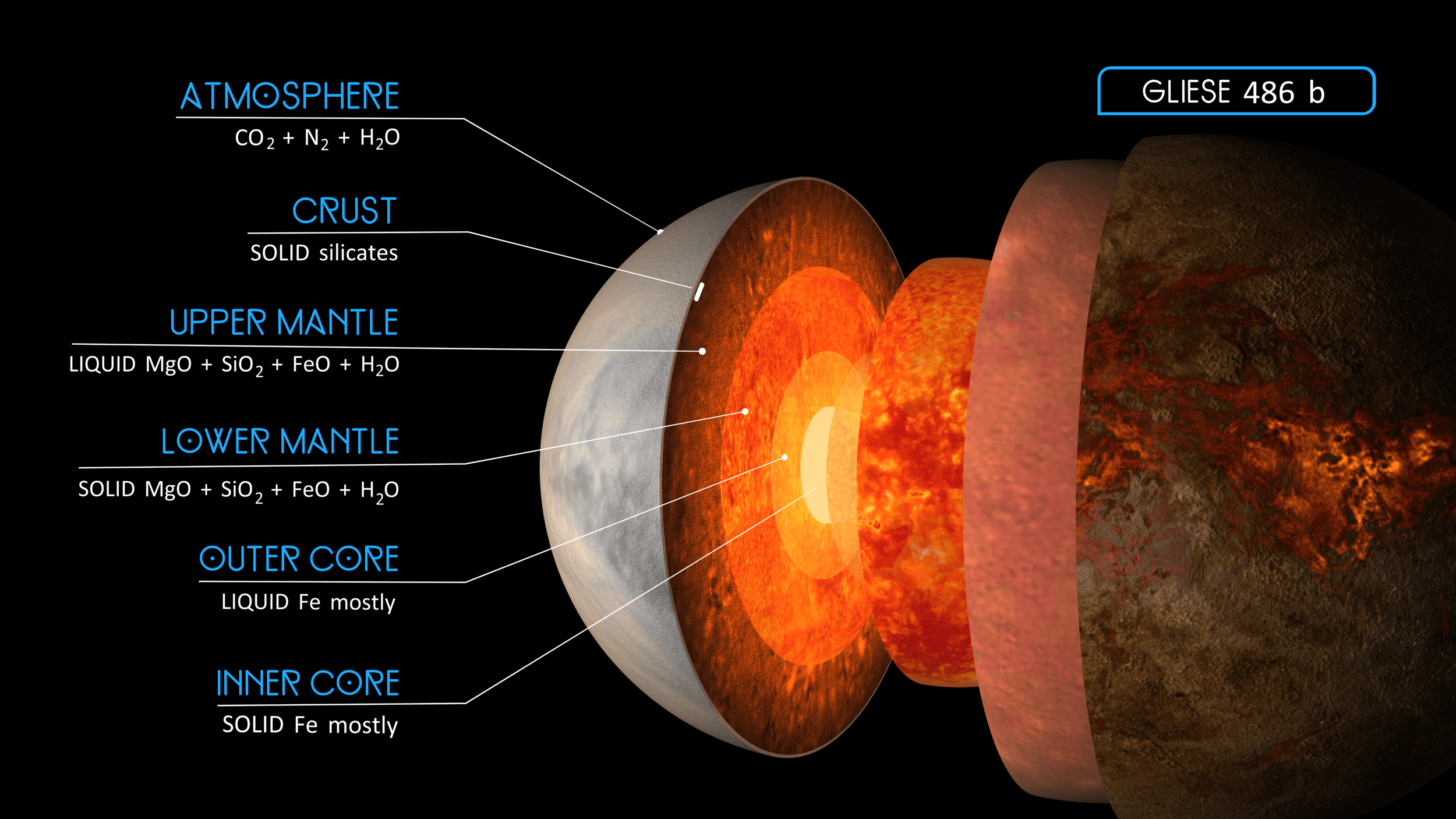 Artistic illustration of the hypothetical atmosphere and internal structure of exoplanet Gliese 486 b. Credits: RenderArea

Thanks to the data carefully obtained with a suite of instruments and space telescopes, a team of astronomers has been able to model the interior and to estimate the relative sizes of the (metallic) core and (rocky) mantle of the exoplanet Gliese 486 b, discovered in 2021.The analysis, published by the journal Astronomy & Astrophysics, is so detailed that has allowed investigating things not seen before.

By using instruments and projects such as CHARA, CHEOPS, Hubble Space Telescope, MAROON-X, TESS and CARMENES, the team —led by the researcher José A. Caballero, from Centro de Astrobiología (CAB, CSIC-INTA)— has also made predictions on the composition of the planet's atmosphere and its detectability with the James Webb Space Telescope, which will soon point its segmented mirror to the planetary system. Researchers from the Institute of Space Sciences (ICE-CSIC) and the Institute of Space Studies of Catalonia (IEEC) participate in this project.

The CARMENES Consortium, a German-Spanish team of astronomers, found in 2019 the exoplanet that resembles most the Earth. However, this exoplanet does not transit (i.e. passes in front of its star as seen from the Solar System) and, therefore, its radius cannot be well determined. Although most of them are not habitable, transiting planets are more interesting for astronomers because they allow to investigate their atmospheres and, only for the planetary systems closest to our Sun, their interiors.

"The properties of the planet are derived from those of the host star. The study of the star using different telescopes and techniques permitted to derive its radius and composition, and so, those of the planet with very high accuracy" says Juan Carlos Morales, ICE-CSIC and IEEC researcher. And he adds: "This makes this system a precious target for further studies with the James Webb Space Telescope."

The same CARMENES Consortium, in alliance with international teams of the USA, found three of the eight closest systems with such transiting planets, the last of them announced just last week.

For Caballero "Gliese 486 b has become the Rosetta Stone of exoplanetology: in the Solar System, we have the terrestrial planets Mercury, Venus, Earth and Mars. Now, the fifth best studied terrestrial planet in the Universe is Gliese 486 b". However, although it is also one of the closest transiting planets known, travelling all the time at 10% the speed of light, a probe would take 260 years to reach Gliese 486 b.

Gliese 486 b and the future of exoplanet science

The most important result from the work published today is the opportunities that it offers to future studies. Future studies such as the formation of planetary magnetic fields in the liquid metallic outer core, because GJ486 b seems to have one as our Earth. These magnetic fields may act as a shield against the storms originated in the stellar host and prevent the erosion of the atmosphere.

Would such an atmosphere be primitive and made of hydrogen and helium? Or be made of carbon dioxide and water steam from volcanic eruptions? Does Gliese 486 b have tectonics?

And although GJ486 b seems to be too hot to be habitable, because of its precise and accurate characterisation, it may become the first (and only, for the moment) planet where we can formulate these questions. Just a few years ago, trying to look for an answer to them was science-fiction!

It is worth remembering that the first exoplanet around a solar-like star, 51 Pegasi b, was discovered in 1995. Since then, every year, astronomers discover exoplanets that are less and less massive, closer and closer, and more and more similar to Earth.

About the projects and instruments involved

To conduct the study, the scientist used the CARMENES (Calar Alto high-Resolution search for M dwarfs with Exoearths with Near-infrared and optical Échelle Spectrographs) instrument, a high-resolution optical and near infrared spectrograph built in collaboration by various Spanish and German research institutions. The CARMENES consortium comprises eleven research institutions in Spain and Germany. Its purpose is to monitor some 350 red dwarf stars for signs of low-mass planets using a spectrograph mounted at the 3.5 m telescope of the Calar Alto Observatory (Spain).

They also obtained spectroscopic observations with the MAROON-X instrument at the 8.1 m North telescope of the Gemini Observatory (Hawaï, USA) and with the STIS (Space Telescope Imaging Spectrograph) instrument onboard the Hubble Space Telescope. The photometric observations to derive the planet's size stem from the ESA's CHEOPS (CHaracterising ExOPlanets Satellite) and NASA's TESS (Transiting Exoplanet Survey Satellite) spacecrafts. The star's radius was measured with the CHARA (Center for High Angular Resolution Astronomy) array on the Mount Wilson Observatory (California, USA).

Participation of the Joan Oró telescope of the Montsec Observatory

Another important set of observations used in this study were conducted from several small-sized robotic telescopes. These observations consist of the long monitoring of the brightness variability of the star in order to measure its rotation period, which is an essential information in order to properly characterise the signal from the GJ486 b planet.

"The Joan Oró telescope provided more than 1 year of photometric measurements for this study, that allowed to determine a rotation period of 50 days for GJ486", says Kike Herrero, ICE-CSIC and IEEC researcher and Technical Director of the Montsec Observatory (OdM-IEEC). The Joan Oró telescope, located at this observatory, in Sant Esteve de la Sarga (Lleida, Spain), is an 80-cm robotic telescope managed by the IEEC.

Press release made in collaboration with the Communication Office of the Centro de Astrobiología (CAB, CSIC-INTA), the Institute of Space Studies of Catalonia (IEEC) and the rest of the CARMENES consortium.

This research is presented in a paper entitled "A detailed analysis of the Gl 486 planetary system", by Caballero, J.A. et al., Astronomy & Astrophysics. Avalaible at the following URL: https://carmenes.caha.es/ext/pressreleases/GJ486/Exoearth.Article.pdf