ICE at a glance

We are fascinated by space. The vast and dynamic sky makes us wonder and dream. We study it at all frequency ranges and via messengers other than photons, like cosmic-rays and gravitational waves, both from the ground and space.

Excelling in our research, we are interested in developing theoretical models and technologies to scrutinize planets, stars, galaxies, and the whole universe. We also aim at using space technologies to understand more about Earth, to model better its climate change, and to develop predictive tools that could help avoid the effects of natural disasters.

Overall, the main asset of our institute is the ability to produce cutting-edge theoretical modelling of what we study observationally, with instruments we help build.

Research is an adventure. Let's do part of the way together. 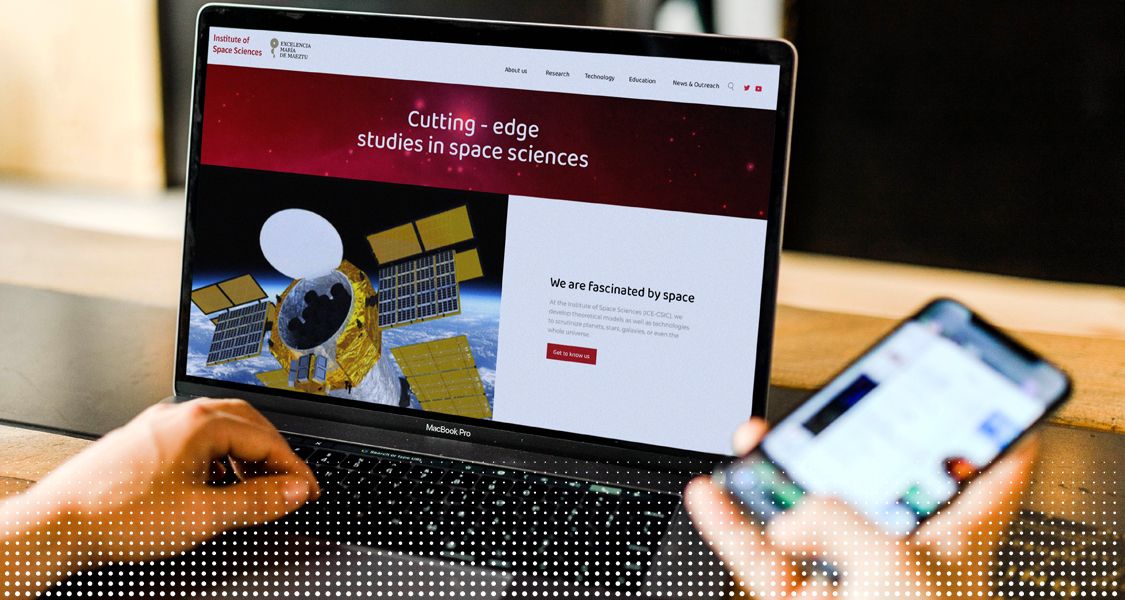 The Institute of Space Sciences (ICE-CSIC) pertains to the Spanish National Research Council (Consejo Superior de Investigaciones Científicas, or CSIC). CSIC is the largest institution dedicated to research in Spain and the third largest in Europe. ICE is a relatively new research center. It was officially created on January 17, 2008 (BOE #15, 3507, Orden ECI/4063/2007, of December 27, 2007). The Institute of Space Sciences also articulates CSIC’s participation in the Institut d’Estudis Espacials de Catalunya (IEEC). In 2015, ICE moved to a new facility located at the campus of the Universitat Autònoma de Barcelona. This building has 3500 square meters of useful space, distributed in laboratories and offices. In 2021, ICE achieved the Seal of Excellence in the María de Maeztu program, placing it among the most important research centers in the country.

Meet the current and previous directors of the institute.

Diego F. Torres, Doctor in Physics from the National University at La Plata (1998) and ICREA Research Professor at the Institute of Space Sciences and IEEC, became ICE’s director in March 2016. He did research at the Astronomy Centre of Sussex University in UK, Institute for Radioastronomy in Argentina, Princeton University, and the Lawrence Livermore Laboratory in the USA, along with long stays in Italy (International Center for Theoretical Physics at Trieste, Salerno University at Baronissi), before moving to Barcelona at the end of 2005 to work at the Institute of Space Sciences and start a research group on high-energy astrophysics.

His research focuses on compact objects and cosmic rays. Prof. Torres develops models for some of the most energetic phenomena known in astrophysics and tests them with observations using ground-based telescopes and satellites. Prof. Torres received several awards including the Chinese Academy of Science Senior Visiting Professorship as well as its Presidential Fellowship, the Friedrich Wilhelm Bessel Award of the Humboldt Foundation of Germany, the Shakti Duggal Award on Cosmic Ray Physics of the International Union of Pure and Applied Physics, the NASA Group Achievement Award, and the Guggenheim Fellowship. He also shared the Rossi prize given to the Fermi-LAT collaboration.

Prof. Jordi Isern I Vilaboy, Doctor in Physical Sciences from the University of Barcelona (1978) and a Research Professor at CSIC, was the founding director of the Institute of Space Sciences and formally held this post for 8 years. In this period, he also founded  the Institut d’Estudis Espacials de Catalunya (for which he was a director in the period 1996-2015). In his tenure, ICE flourished from just a few permanent members to its first 14, consolidating itself from a 'forming institute' to a full-fledged institute of CSIC. Under Prof. Isern's directorship, ICE achieved having a new building where to move in by early 2015. This was a great change for the institute, and allowed for the expansion in personnel and work spaces.

Among other responsibilities, Prof. Isern has been co-editor of Europhysics Letters (1992-1997); member of the Spanish Delegation to UNESCO (tsunami prevention; 2005); member of the Royal European Academy of Doctors since 2001 and member of the space science advisory committee of the European Space Agency (2013 -2017). He was appointed President of the Royal Academy of Sciences and Arts of Barcelona (RACAB) in 2021. He continues conducting research at ICE, focusing on the final stages of stellar evolution, galaxy evolution, and supernova explosions.